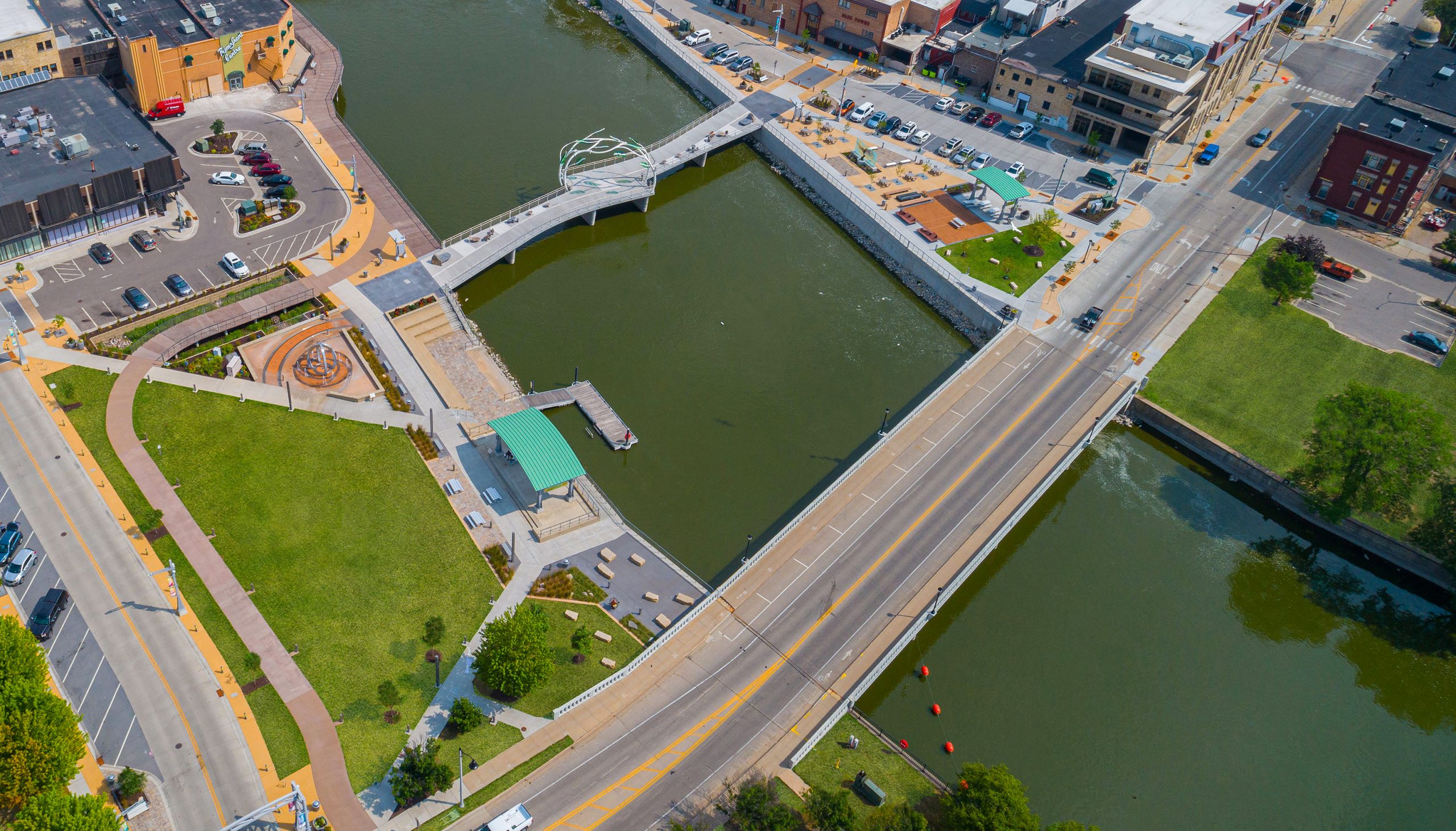 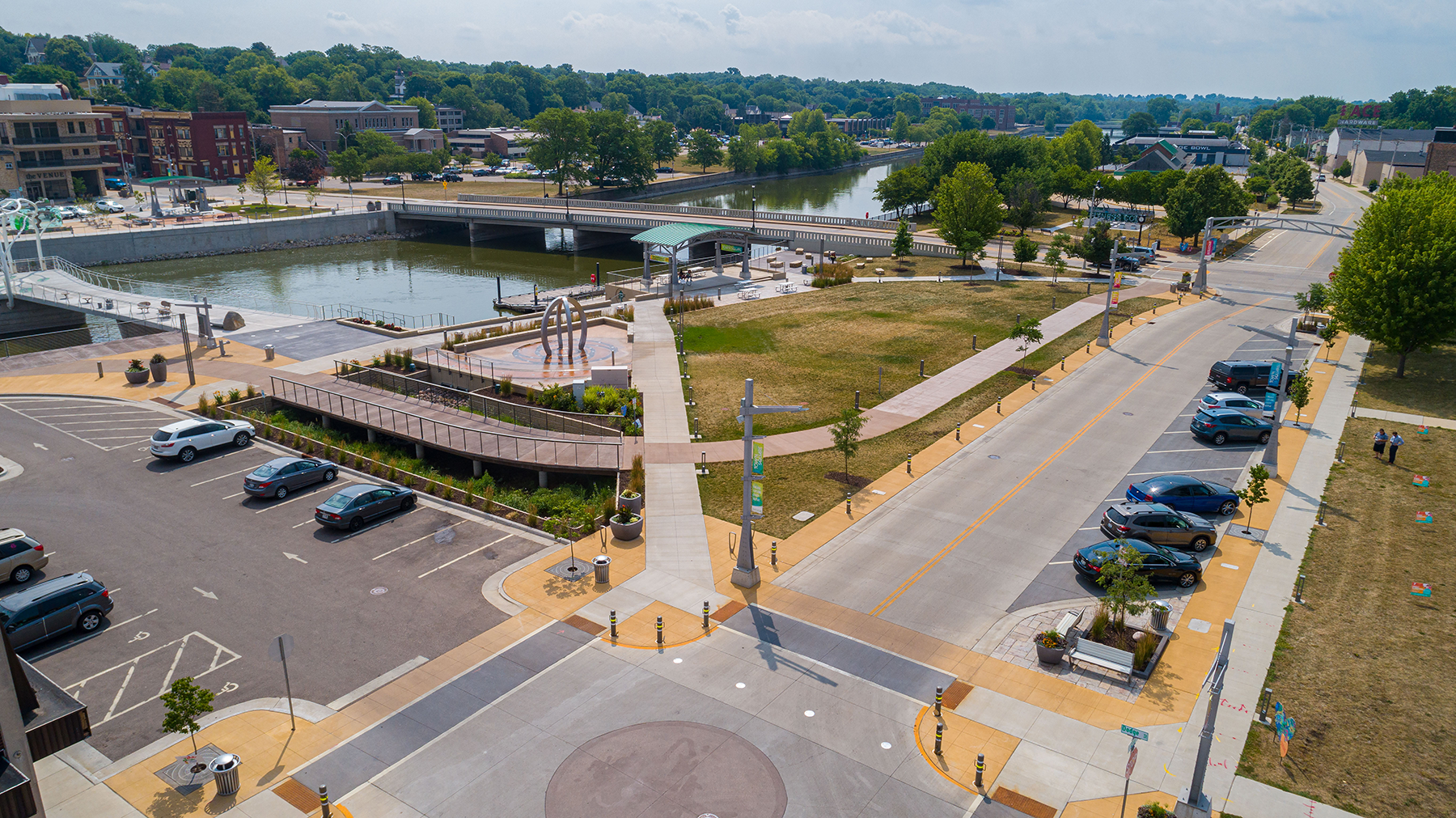 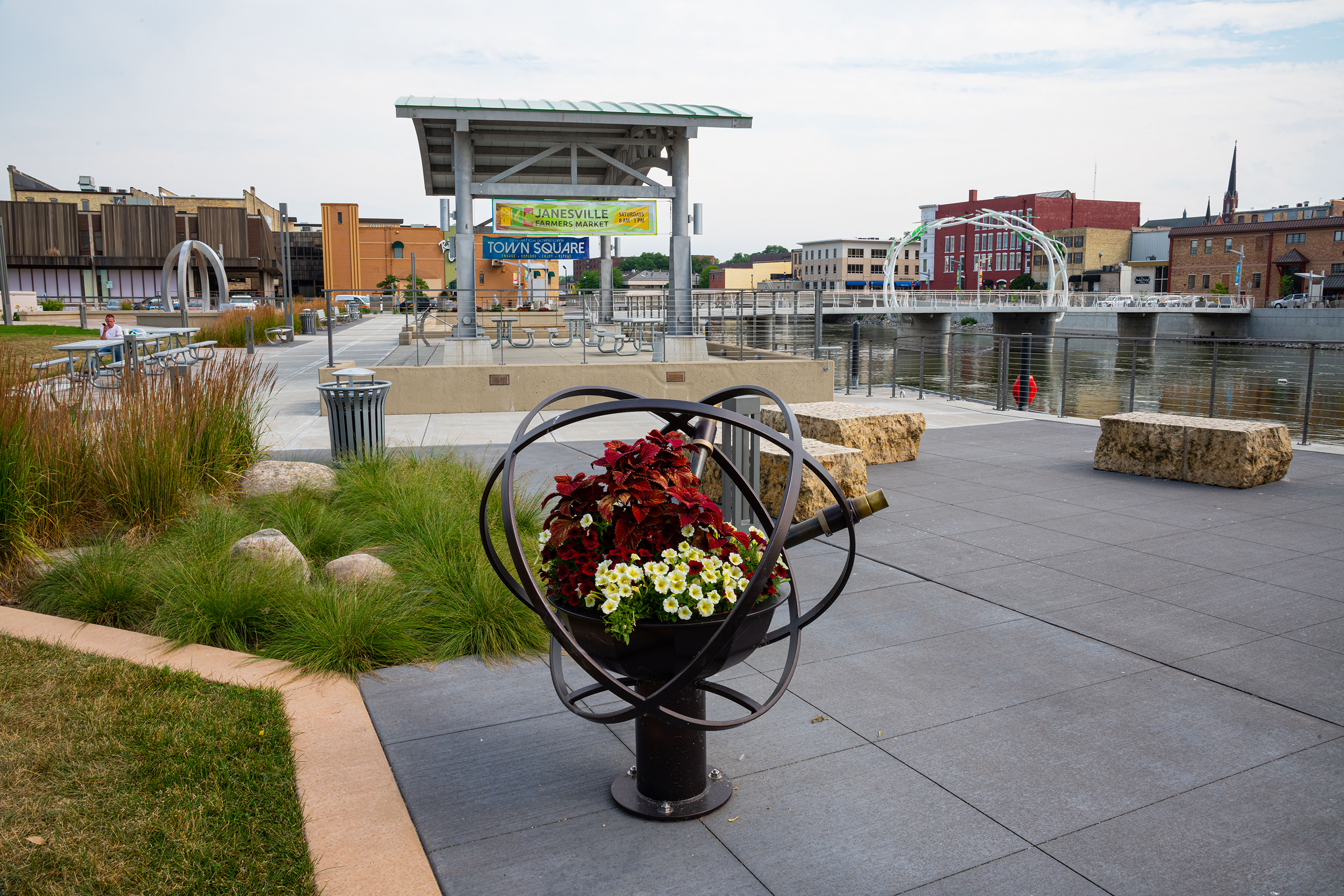 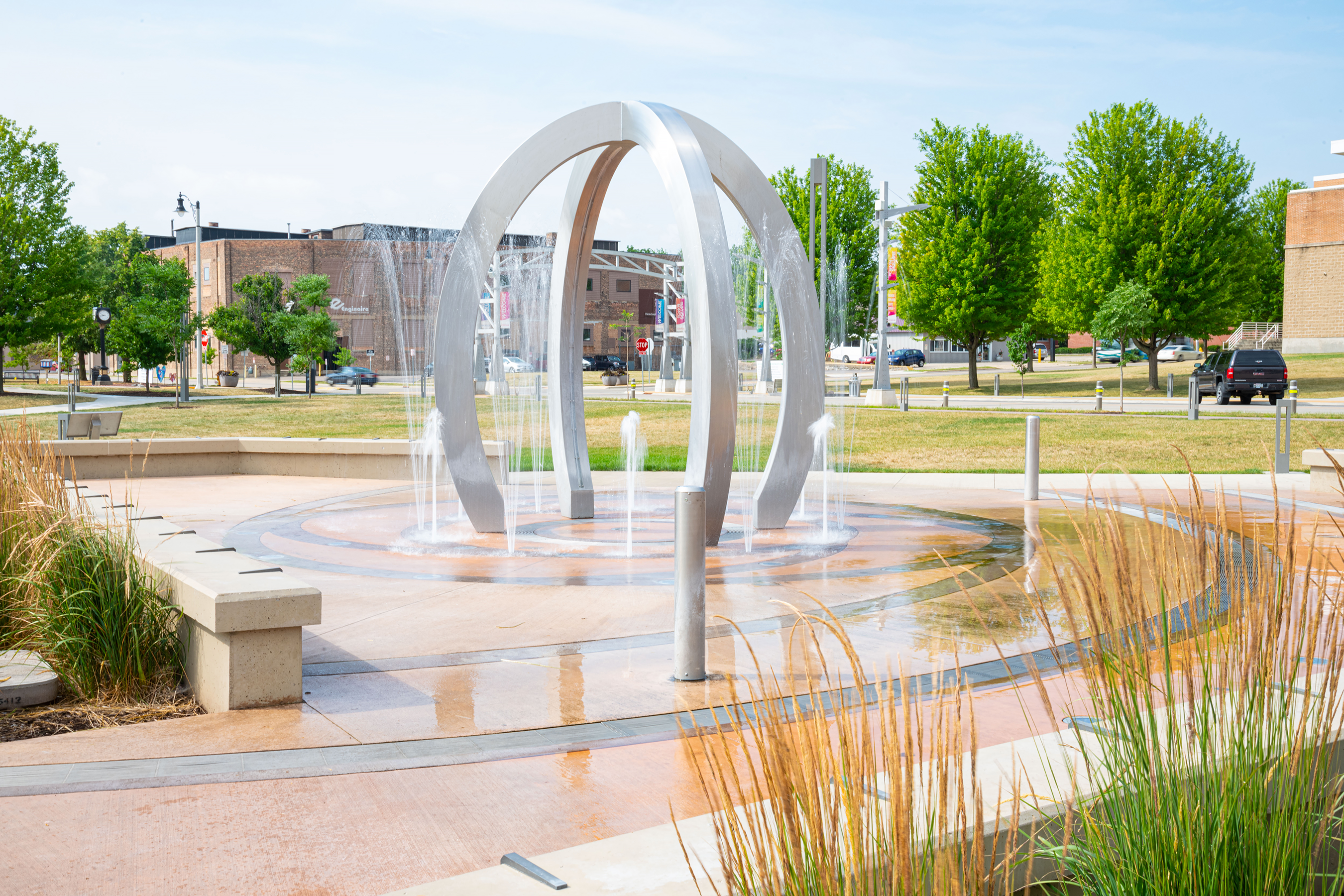 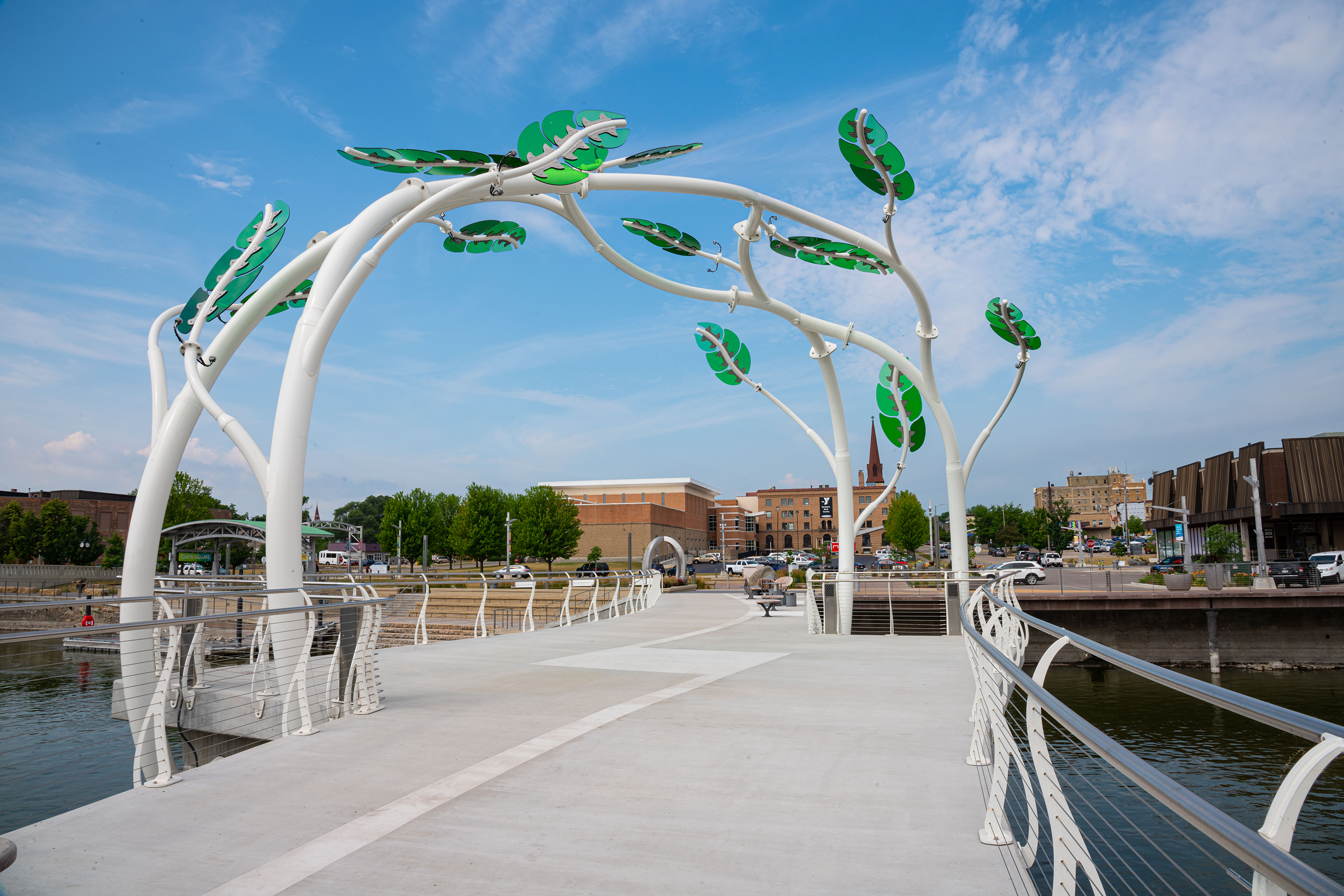 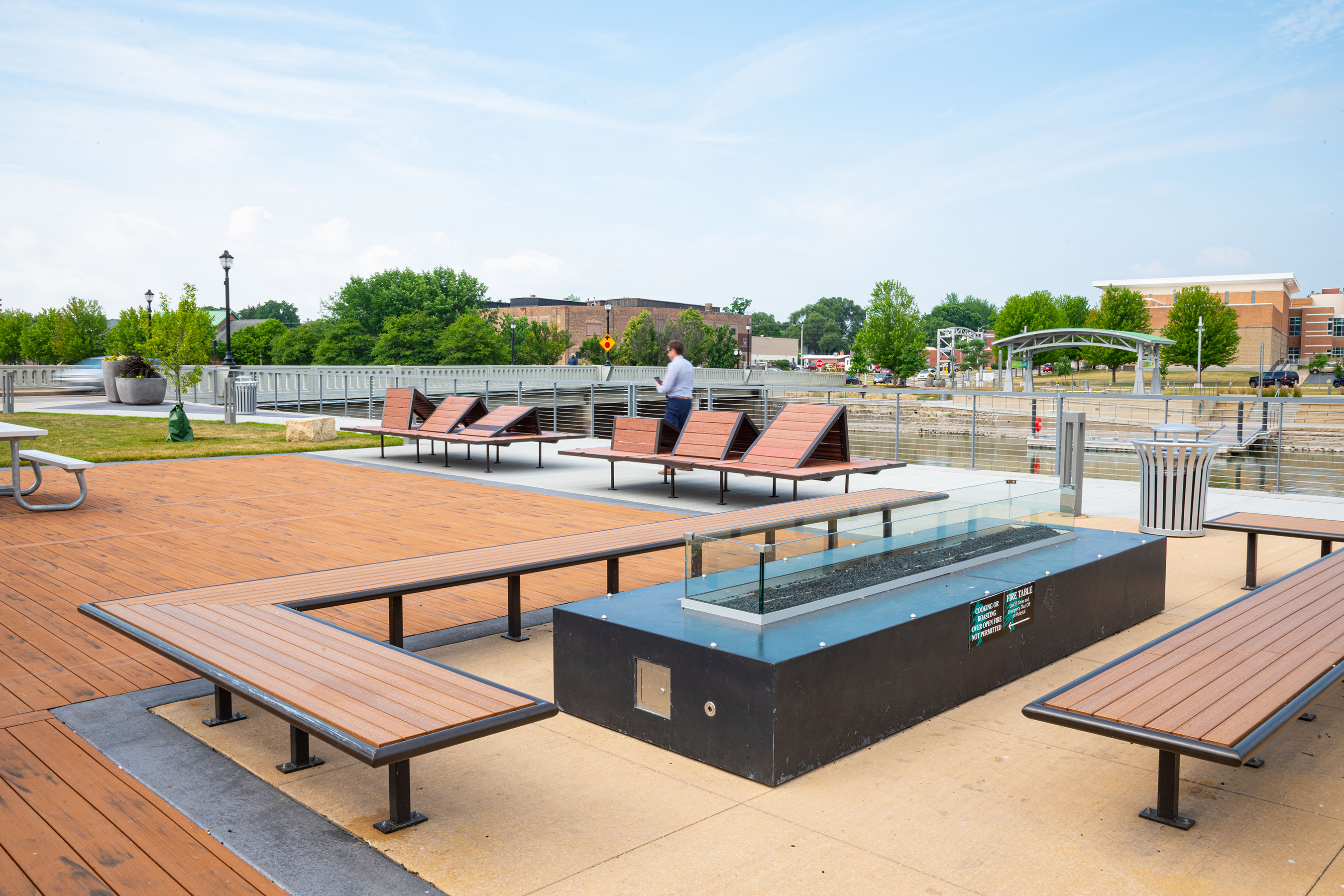 The City of Janesville embarked on a multi-year, multi-phased strategy to revitalize its downtown and ancillary corridors to improve the quality of life for its residents and attract and promote activity in the downtown area with a new Town Square. The Town Square project spanned both sides of the Rock River and was divided into two parts – the West Town Square and East Town Square.

Improvements at West Town Square North included the relocation of the ice age trail and included two sections of elevated precast trail with cable railing and integral in-rail lighting, a bio-infiltration basin, reconstructed parking area, a drinking fountain, and hardscaped areas and amenities coordinated with the other Town Square stages. Custom fixtures and features, such as light poles and a kiosk provided by the Forward Janesville Foundation, were also installed. The interactive water feature that Forward Janesville Foundation funded was completed during this stage and coordinated with the bio-infiltration basin.

The east side of the Town Square is defined by the same palette of materials and amenities as the west side, including the custom light fixtures, gateway features, a kiosk, and a similar pavilion structure as found in the work completed in previous stages. The roadway is essentially a flexible use parking lot that supports the local businesses and can be transformed into a community space for programmed events by blocking each end of the street. The primary improvements that make it unique include an activity deck to support outdoor exercise such as yoga, a shaded plaza area with tables that give users a space to work outside or sit and have lunch, an artistic donor wall with custom sculpture that recognizes all who have financially supported the Town Square project, a pavilion structure, and a gas fire pit table.

To connect East Town Square to West Town Square, the Blain Gilbertson Family Heritage Bridge was built. This pedestrian bridge is the defining feature of the Town Square project and provides a connection across the river while also creating a waterfront experience for downtown visitors. The focal point of the bridge is a 30-foot-tall sculpture called Resilience emerging from two bridge piers and meeting in the middle as a symbol of the community’s resilience to the challenges to survive, adapt, and grow amid economic challenges to the community. The bridge was funded entirely by private contributions from residents and local businesses, demonstrating the community’s support and investment in the Town Square project.

River Street was identified as an integral component of the West Town Square project to be used as a festival street during programmed events. The festival street design was predicated on a shared-use, with a narrow street section to be shared by cyclists and autos and angled direction-specific parking to provide parking for a typical day and a dedicated area for tents or vendors during events. Other improvements within the River Street corridor include in-ground receptacles, a removable bollard system, a raised pedestrian-friendly intersection at Dodge Street, hardscaping, and other amenities coordinated with the other West Town Square stages. Custom gateway features and light poles with LED luminaires were provided by the Forward Janesville Foundation.